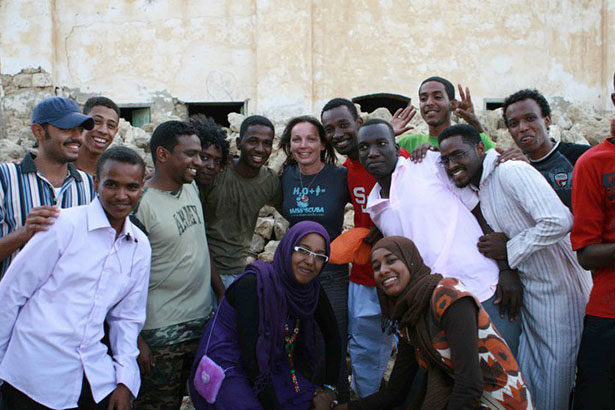 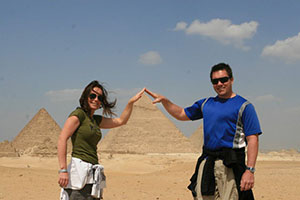 Exploring the Red Sea has been waiting patiently on my “To Dive” list until recently, when it was finally time to live out that dream. I wanted to experience the Red Sea, but without the crowd. Therefore Sudan was the only logical choice.

We decided to start our trip in Cairo with the must see tourist attractions. First, we visited the great pyramids of Giza, the oldest of the Seven Wonders of the Ancient World. Hilaire and I decided to avoid tourists (as much as humanly possible in such a place) and hired a guide and two camels. We lucked out and were able to take amazing shots of the Sphinx and the pyramids without other people in them. Excitedly we opted to take trips to the other nearby pyramids, explored the catacombs with an archeologist and admired the wealth of the Egyptian Museum.

Additionally we amassed variety souvenir shawls, spices and sculptures at the Khan Al-Khalili, the biggest bazaar in the Middle-East. Thanks to our loyal taxi driver we even tried the traditional local meal: kusherie that contains pasta, garlic, lentils and a variety of secret ingredients.

Without a doubt, the speed and pushiness of the Egyptians took some getting used to. Friends’ tips prior to our trip prevented a lot of headaches. We arrived prepared for the never ending demand for “baksheesh” (tipping) and knew the “bargaining rules” (never should pay more than half of what they ask and never start to bargain for anything that you do no intend to buy.

Four days was the perfect amount of time to explore Cairo. Finally it was time to go to the airport and head to our main destination of this trip: a week long live aboard adventure in Northern Sudan. I have been in the dive industry for about twenty years, but have met only a handful of people who can say they visited this part of the Red Sea.

I would lie if I were to say that it was a breeze to get there. Visiting Sudan requires careful preparation. Getting a visa is not as easy as in most countries. One needs to be invited by a local company. My childhood friend Livia is one of the owners of the Andromeda and she provided the invitation for us. Hilaire shot video while I took photos and wrote articles to showcase the diving in the Red Sea for our fellow Americans. In the U.S. people tend to tense up at the mere mention of the Middle East. We wanted to document reality. 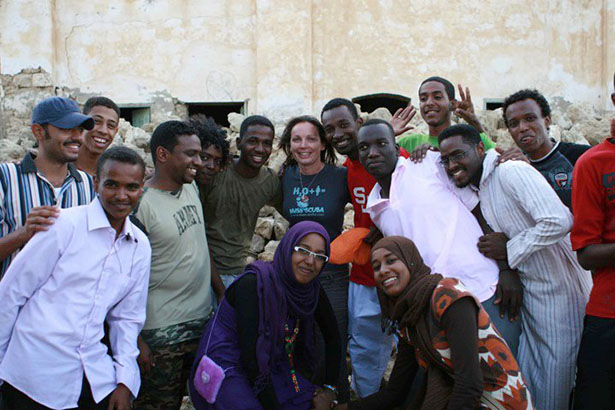 Additionally, prior to our departure we also had to get a yellow fever vaccination so as to be able to visit other countries after being in Sudan.

We were greeted at the Cairo airport by a comprehensive guide who checked in all of our luggage and got our tickets (there were no seat assignments by the way, so arriving early is a must). Luckily we had a group check-in and nobody questioned our excessive pieces of luggage or their weight, so our extra heavy camera equipment got onboard without incurring extra fees.

After a two-hour flight another representative at the Sudan airport greeted us and we were shuttled to our safari boat, the Andromeda, where everybody fell asleep immediately, given it was 2a.m.

Our dive guide, Mohammed Sanad welcomed us with a big smile the next morning (and every morning). I particularly enjoyed his dive briefings that he so skillfully illustrated on the white easel. Just by listening to his words and following his erasable pen I could vividly picture what we were going to see. He does his job above and beyond what a dive guide briefing calls for. 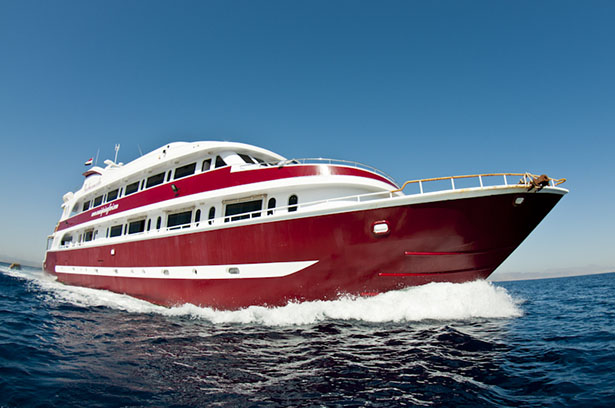 I have witnessed hundreds, if not thousands of divemasters at work. I myself teach diving for a living. I can count on one hand those dive professionals who can be mentioned in the same category as him. Mohammed is not only extremely knowledgeable about the dive sites and diving in general, but he is one of the most patient and open minded individuals whose mission is to accommodate every diver’s needs and wishes.

The organization of the boat and the flow of schedule enabled 27 divers to submerge four times a day. As far as I understood, the Andromeda is the only vessel in Sudan offering four dives per day: one at sun rise, one after breakfast, one after lunch and a night dive. Thus providing 21 opportunities to be submerged in the underwater world of North Sudan during our weeklong safari. My favorites were the sunrise dives. Awakening to the colorful reefs, exploring ship wrecks and search for sharks is a thrilling way to kick off any day. 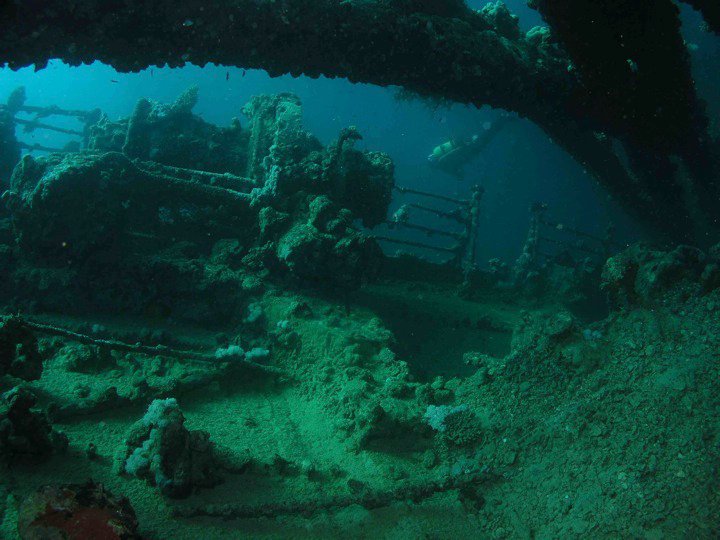 Each dive was followed by tasty buffet style meal in the elegant wooden dining area. The variety of the menu would have left even the pickiest eaters satisfied. Artistically decorated vegetables provided a healthy side to spicy chicken wings, cheese puffs and unique lasagna dishes.

Soups were incredibly popular during chillier evenings, but desserts disappeared within moments every night. We never had the same food twice. The chef provided us a true gourmet experience. I was looking forward to the dining experience every day almost as much as the diving.

Sudan provides a colorful heaven for photographers and videographers. The subjects to shoot are endless. Making decisions can be tormenting. I was swapping back and forth between my wide angle and macro lenses to establish overall story telling pictures and provide detailed close up images of the environment.

On numerous dives we opted to drop deep in search of schools of hammerheads. To be honest, I did not get any good shots of them. Even when they graced us with their presence, they were too deep. I did not get as wrapped up with the hammerhead search as some others on our boat, because I was more excited about the historical importance of Sudan, in particular: the Umbria.

We did three 70-minute dives on this historic wreck and saw something different every time. Our first encounter was a night dive establishing a mysterious and grand atmosphere. It is an amazing dive –giving opportunity to explore this enormous ship and its treasures for a relatively long time as it does not lie in great depth (unlike most other historical wrecks.) The top deck almost breaks the surface and the deepest point is about 30m/100ft. 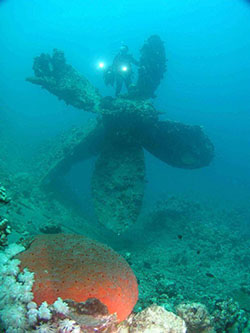 Mohammad toured us around the interiors after he shared the cool story behind the sinking of the vessel. Although expected to enter the war any day (1940), Italy was still technically neutral and there was only so much the Royal Navy could do to delay the vessel before her precious cargo reached Italian forces in Africa. On the evening of June 10th, Captain Muiesan was listening to his radio and became the only man on board to be aware that Italy had formally declared War. Under the very noses of the British Navy, he then succeeded in scuttling his ship. After the War, a British team of Bomb-Disposal experts reported that, in the event of an explosion, half of Port Sudan was likely to disappear.

We picked up (and of course put back) Italian tiles, saw two enormous pizza ovens in the bakery. Thousands of wine bottles were scattered everywhere while bullets and some 360,000 bombs were lined up in a very organized manner. Italians do even war in style. My favorite view was the three coral covered old school Fiat automobiles providing a home to hundreds of glossy fish. The sunlit corridors the next morning provided perfect photo ops. We lucked out again.

I truly felt I was on vacation from my dive instructor job while I was diving from the Andromeda. It is a brand new vessel equipped with all the modern life luxuries that you could ask for. Relaxation is instantly established the moment one steps inside the moody Arabic style Shisha Room. The hand made burgundy carpet matches the see through curtains and compliments the detailed woodwork that composes the cabin. Guests puff cherry and apple flavored tobacco after dinner while smooth jazz plays in the background as divers recall their daily encounters with schools of barracudas or jumping turtles.

I would absolutely recommend the Andromeda to anyone interested in diving the Red Sea. It is an incredible value and it’s crew help make it a trip of a lifetime.