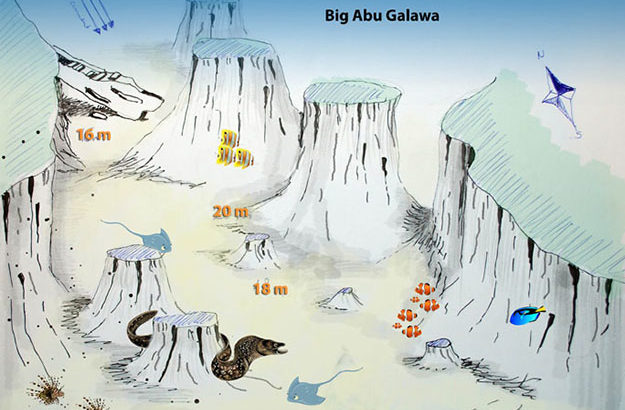 Abu Galawa Soghayr is a crescent shaped reef with a turquoise blue lagoon or pool enclosed within the reef towards its leeward side. Galawa is the name which refers to this turquoise colour of the blue pool. Abu in Arabic means ‘Father’ and Shiwayya means ‘Small’. Therefore a rough translation of this site name would be – Small Father of Turquoise Blue Water. 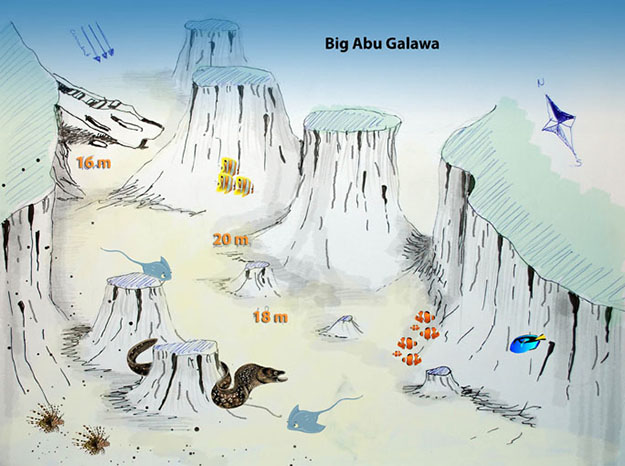 To the western end of the main crescent shaped reef is a smaller reef piece with gullies and swim-throughs in it. On the southwest side of this is the wreck of small sailboat at the base of the reef, which lies on its starboard side in 18m of water on a sandy sea floor.

Diving the reef is very easy and straight forward.  The anchor points are usually on the southern side of the reef, with a weak current coming in from the north. Follow the western flan of the reef. You will come across a 16m sailing yacht. Origins are disputed, but it is likely to have sunk in the early 80s (based on the coral growth). You can swim into it, but there is not much to see. Follow the reef to the north and you will come automatically to a passage between the reef going south.